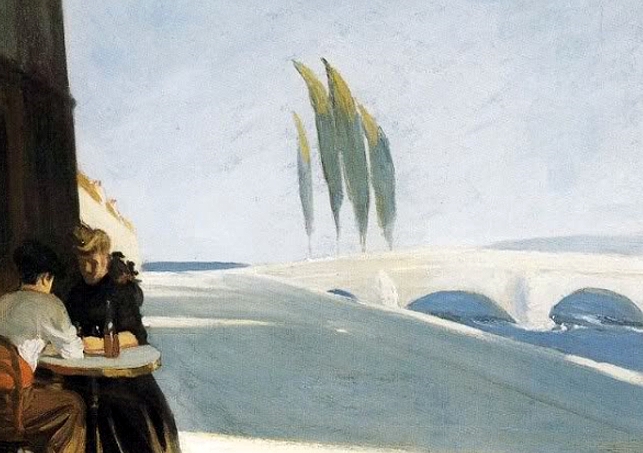 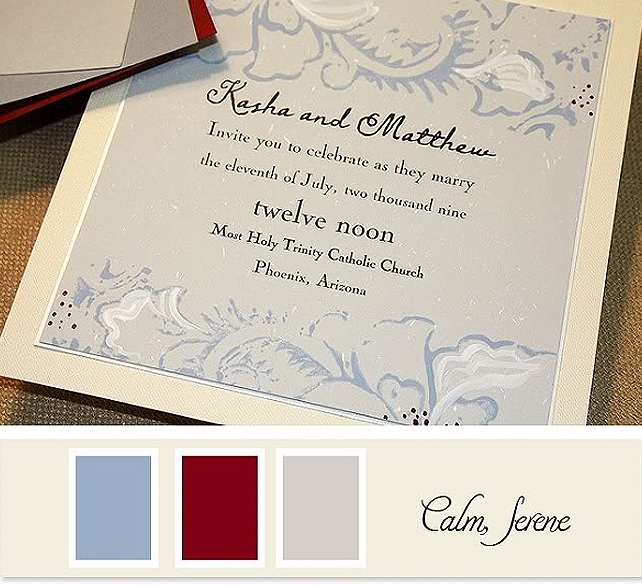 So Inspired Ink has returned here  but for the next few weeks I would like to share my creations until now only seen on Weddingbee PRO!  Enjoy!

As originally posted on Weddingbee PRO:

“Inspired Ink” began as a weekly post on my personal blog last year.  The idea is to take an image that inspired me the previous week and create a custom invitation based on that same image.  One of my favorites from earlier this year was a little number I created after finding what I call “Suspended Orchids” on Karen Tran’s enchanting blog.  I just loved the sparkle and shine she captured as the sunlight trickled through the glass spheres and felt compelled to capture the look on paper!

So each week I plan to continue my “Inspired Ink” tradition as an exclusive-to-Weddingbee PRO post! This week I chose an Edward Hopper painting titled “Le Bistro / The Wine Shop”,  1909.  The mood captured here is what I find most striking; calm and serene.  The Silvery blues, grays and a touch of sienna and scarlet (more visible in person) come together beautifully in this canvas I had the pleasure of viewing in person last week at The Whitney.

I combined our newest Swoosh and Swirl pattern with hand-painted strokes of white plus tiny red dots in scarlet ink.

Find an image that catches your eye and would like to inspire one of my posts?  Send me an email, your image and a short description to kristyrice@www.momentaldesigns.com

Behind the Scenes – Holiday Ombre on Glitterguide.com

My Best Friend's Wedding – The Flowers